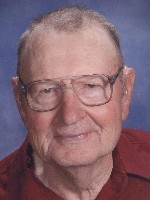 Funeral Services for Donald Botker will be held on Friday, August 1, 2014, at Trinity Lutheran Church in Clinton, beginning at 2:00 p.m. Rev. Bev McNeill will officiate. Music will be provided by Bonnie Stotesbery, Janine Teske, and Randy Stotesbery. Casket bearers will be Jim Moberg, Gene Moberg, Bruce Moberg, David Botker, Dan Botker, and John Kramer. Honorary bearers will be everyone who knew and loved Don.

Visitation will be held at the church Thursday evening, July 31, from 5 - 7 p.m. and also one hour before the service.

Donald Allen Botker was born in Clinton, Minnesota on April 22, 1932, to Elmer and Violet (Johnson) Botker. Don was baptized and confirmed at Elim Lutheran Church. He graduated from Clinton High School in 1950. On July 9, 1965, Don was united in marriage with Shirley Robertson at First Lutheran Church in Worthington, Minnesota. To this union two sons were born. Steven requested a sister to join the family, so the Botkers were excited to adopt Kim in 1974.

Don truly enjoyed farming and he made it a lifelong career. He first farmed with uncle Cecil Johnson, next with brother, Vernon, then independently until 1991. For the next 21 years Don was able to finish his career farming with his son, Mark. In 1997, Don and Shirl moved from their farm in Clinton to the peninsula on Big Stone Lake. After a couple years of watching lake levels rise, Don and Shirl moved above sea level, in 2001, to their current home in Ortonville. Don was an active member of Trinity Lutheran Church in Clinton.

Don had several interests. He was a bowler and enjoyed his many years playing in a league. Don enjoyed hunting, fishing, camping and Minnesota sports. He also enjoyed morning coffee and visiting with friends each day. Spending time with his grandchildren filled Don with joy and he especially liked attending their sporting events. He will be deeply missed.

Left with his loving memory are his wife, Shirley Botker of Ortonville, MN; children: Kim (Mike) Morris and their children Jack and Julia of Fargo, ND; and Mark (Maria) Botker and their children Emma, Lora, and Greta of Clinton, MN; sister Leota (Iver) Moberg of Clinton, MN; sisters-in-law: Dorothy Botker of Le Mars, IA; Dorothy Kramer of Worthington, MN; and Janice Robertson of Ashland, OR; and many nieces and nephews.