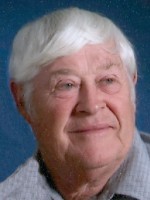 Funeral services will be held on Saturday, March 8, 2014, at 2:00 p.m. at Trinity Lutheran Church in Ortonville. Rev. Dennis O'Neill will officiate. Burial will be at Milbank City Cemetery. Visitation will be at the Mundwiler & Larson Funeral Home on Friday, from 5 to 7 p.m., with a 7 pm prayer service, and will continue one hour prior to the funeral at the church on Saturday.

Dennis Dean Dragt was born on September 19, 1936, in rural Roseland, Minnesota to Elmer and Florence (Tjaden) Dragt. His family lived in Big Stone City, South Dakota through his first grade of school and then moved to Ortonville, Minnesota. Dennis joined the National Guard in 1954. Upon high school graduation in 1955, he also attended and graduated from Minneapolis School of Business.

On July 5, 1958, Dennis was united in marriage with Carol Sprung and they moved to Casper, Wyoming where he worked in the National Guard and in the oil fields. Dennis was honorably discharged from the National Guard in 1966. In 1967, Dennis and his family moved to Casey, Illinois where he was employed by Marathon Pipeline. In 1971, a move was made to Ortonville, Minnesota where Dennis purchased Lakeshore Fruit Farm. Several years later he formed D & D Heating with Larry Dahle, a partnership that lasted for five years. In 1993, Dennis built Lakeshore RV Park and Fruit Farm. In 2005 he sold the business and retired.

Dennis was a member of Trinity Lutheran Church and he worked with the church Youth Group for 12 years. In his free time, Dennis enjoyed woodworking, building Martin birdhouses, and model railroads. He also built and flew remote controlled airplanes. Dennis enjoyed playing the board game "Settlers of Catan". Dennis and Carol loved traveling in their RV.

He was preceded in death by his parents Elmer and Florence Dragt (Strube); and his stepfather Dick Strube.