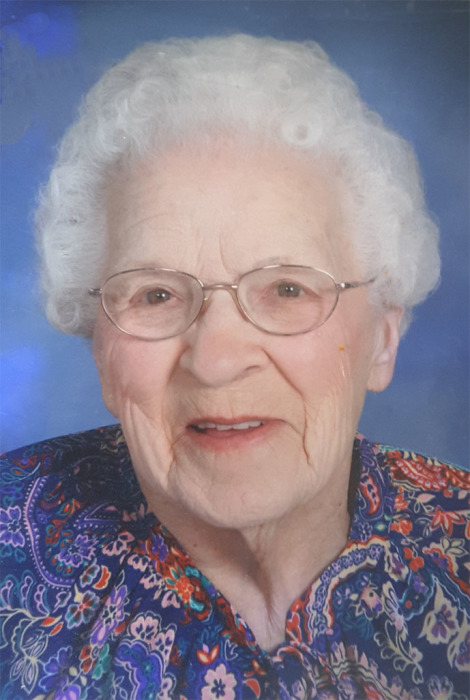 Deloris Andrews, age 97, of Graceville, passed away on Thursday, December 6, 2018, at Holy Trinity Hospital in Graceville.

Mass of Christian Burial will be held on Monday, December 10, 2018, at 11AM at Holy Rosary Catholic Church. Visitation will be held from 9 to 11AM on Monday at the church and Fr. Brian Oestreich will celebrate the Mass. Burial will take place in the Graceville Consolidated Cemetery.

Deloris Lucille (Schwagerl) Andrews was born on February 21, 1921, near Beardsley, MN, to Carl and Christine (Piechowski) Schwagerl. She attended school in the Beardsley area until eighth grade. Deloris helped and worked on her family farm until she got married. On June 21, 1941, Deloris was united in marriage to Roy Andrews and together, they had nine children.

She was very active with her children and grandchildren and attended every game, concert, or event. Deloris enjoyed following Minnesota Twins baseball and rarely missed watching a game. She loved doing crafts and making things for her friends and family. Deloris helped take care of her mother and was a terrific caretaker of people who were in need of it. In later years, Deloris and Roy enjoyed traveling all over the United States to visit friends or family. In 2007, an Andrews Annual Golf Tournament was created in her name.

Preceding her in death are her parents; husband, Roy, in 2000; son, Dennis Andrews; and four siblings.