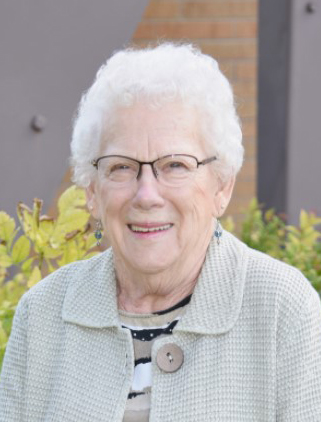 Delores Alvina (Heins) Danielson was born on October 9, 1934, in Stevens County, MN, to William and Edna (Lange) Heins.  She was baptized and confirmed at Trinity Lutheran Church in Johnson, MN.  Delores attended first through sixth grades at the District 46 School in Stevens County, then went to seventh and eighth grades at Trinity Christian Day School, and graduated from Chokio High School in 1952.  Delores went to work in the Credit Department at the Sears Store from 1952 to 1959 and later, was a farm wife doing many difficult tasks on the farm.

On April, 4, 1959, Delores was united in marriage with Robert Danielson and to this union, three children were born.  Together, the couple made their home on a farm in Artichoke Township of Big Stone County until they moved to Ortonville in 2012.  Delores and Robert enjoyed wintering in Texas from 1986 to 2013.  She was a member of Eidskog Lutheran Church from 1959 until it’s closing in 2015. Delores held many different offices in the WELCA circle and was a Sunday school teacher for many years in the church. She later became a member of Zion Lutheran Church in Ortonville.  Delores belonged to the Live & Learn Homemakers, was the treasurer at Big Stone County DFL for many years, and was on the Monarch Heights Board.

Preceding her in death are her parents and husband, Robert in 2014.