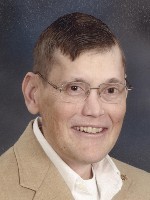 David Stolpman, 56, of Ortonville died on December 10, 2014 at Northridge Residence.

David Theodore Stolpman was born on October 14, 1958, to Urban and Lucille (Loehrer) Stolpman in Ortonville, Minnesota. He graduated from Ortonville High School with the class of 1977.

Disabled since birth, David still lived his life to the fullest. He worked part time at Bill's Supervalu for over 20 years, a job that filled him with pride. A ham radio operator, David spent hours connecting with the world. He was a member of St. John's Catholic Church in Ortonville.

In March of 2013, Northridge Residence became his permanent home. He felt he was treated like royalty by the staff and his family is very thankful for the excellent care he received while living there. In late summer of 2014, David had moments of clarity and staff member Linda Ulrich offered him loving, Christian counsel, which comforted him greatly and insured his salvation. This certainty enabled his brother Rick to make the difficult decisions that laid ahead much easier.