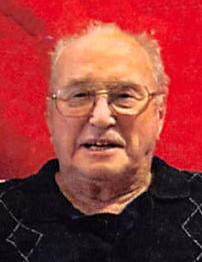 While maintaining social distancing guidelines, we are now able to gather for visitations and services. The use of face masks by attendees is required, and we will continue taking the necessary steps to keep our facility clean. For those who prefer or require continued precautions, webcasting and/or livestreaming will be viewable below this obituary.

Dallas Lynn Gloege was born on December 10th, 1930, in Ortonville, Minnesota, to Edwin E. and Bessie (Gloege) Gloege. He went to Agassiz Township District 20 School through the eighth grade and graduated from Odessa High School in 1949. Dallas joined the Navy in 1950. During his service, while stationed in Brunswick, Georgia, he was in charge of maintenance on the naval blimps (airships). While on leave in 1953 he married LaVonne Koehntopp on June 5th at the Yellow Bank E.U.B. Church in Lac Qui Parle County, MN. After their honeymoon they returned to Georgia where their son Steven was born in June of 1954. After being honorably discharged from the Navy in the fall of 1954 they returned home to farm in Agassiz Township, on the Yellow Bank River, near Odessa, MN.

Dallas greatly enjoyed farming. He also milked cows; although he didn't enjoy it, it made for year-round income for the family. In the summer for the first few years he also hauled gravel for Larson Sand and Gravel for the local township roads around the farm.  In May of 1957, their second child, Kevin, was born. He continues to farm the family farm to this day.

Dallas and LaVonne also found time to take numerous trips with the family, including two World Fairs: Montreal, Canada and New York City. After retiring from farming, Dallas was a rural mail carrier for over 30 years. Over those years he logged over one million miles without ever having an accident. He especially enjoyed delivering the mail because he was able to visit and keep up with so many people on his route. In addition to being a full-time mail carrier, he continued to help Kevin on the farm preparing the fields in the spring for planting and hauling the majority of the crop to market in the fall.

Dallas was a member of the Yellow Bank E.U.B. Church, where he served for many years as Treasurer and on the Board of Trustees, and later belonged to the Central United Methodist Church of Milbank, SD. He was an active community member, serving on many local boards, including: District 20 School Board in the Agassiz Township, the Odessa School Board, the Agassiz Township Board, and the Bellingham Cattlemen's Shipping Association Board. He and LaVonne owned and operated the Old House Antiques in Big Stone City, SD for many years. Dallas became a resident of Fairway View Nursing Home in November of 2018.

Our local florists are listed on our Resources page.