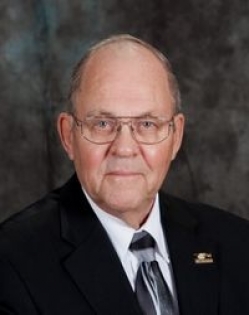 Conrad Leroy Severson, age 81, of Clinton, passed away peacefully on hospice after a long illness on May 16, 2017, at his home surrounded by his family.

Funeral services will be held on Friday, May 19, at Trinity Lutheran Church in Clinton beginning at 10:30 a.m.

Visitation will be held Thursday evening from 5 – 7 p.m. at the church and continue one hour prior to the service. Minister Bev McNeill will officiate and burial will be held at a later date at Willow Creek Lutheran Cemetery near Dell Rapids, SD.

Conrad was born on October 5, 1935, in Pipestone, MN to Howard and Veva (Bickford) Severson. He was raised in Pipestone and attended Pipestone Central High School and graduated in 1953. He served in the Army National Guard from 1953-1959. He received certification in business banking and commercial lending from the American Institute of Banking.
Conrad married Sharol Jean Jenson on June 13, 1964, at Willow Creek Lutheran Church in Dell Rapids, SD. They have three children - Kevin, Kent and Kimberly. He taught all three kids how to golf and took the family on vacations in their RV every summer.

Conrad liked to keep himself busy and throughout his lifetime he was an active member of several church and civic organizations. While in Pipestone, he began his lifelong membership in the Masonic Lodge and Osman Shrine Temple. He also served as the treasurer of the Methodist and First Lutheran Church. In 1968, he received the Distinguished Service Award from the Pipestone Jaycees. Conrad was the president of the Hiawatha Club and acted in the Hiawatha Pageant each year. His adopted character was "Pearl Feather". While in Sanborn he was a member of Our Saviors Lutheran Church and served as the President of Sanborn's Commercial Club. He was a member of Trinity Lutheran Church in Clinton since 1983. He sang in the choir and served as their treasurer for four years. After retirement, Conrad remained active by becoming an instructor for AARP, teaching the 55 Alive Driver Safety Training for 15 years. He also drove for Prairie 5 for several years, assisted Mundwiler and Larson Funeral Home, and volunteered for Lunch Buddies at Clinton Elementary School. He had a love politics, serving as treasurer of the Big Stone Republican Party and served as an election judge. He liked attending high school sporting events, especially when his grandchildren were involved. Conrad and Sharol loved to travel in their RV, going to craft shows and taking the grandchildren. They both took four trips to Norway to visit relatives.

"I have fought the good fight, I have finished the race, I have kept the faith." 2 Timothy 4:7