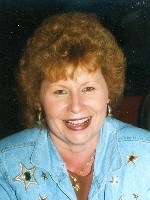 Carol Ann (McMahon) St. George was born July 10, 1943, in the Milbank hospital. She was the daughter of Robert and Laura McMahon.

Carol attended school in the rural Milbank area, later moving to Big Stone to care for her grandfather, Tom McMahon. Carol worked at the canning factory, then moved to Milbank and worked at Lyle's cafe. At the age of 18 she joined the army and was stationed in San Francisco, California. She met her husband Jerry St. George in California. They married and then moved to Seattle, Washington. There Carol was a foster mom for 20 years, and also ran a daycare.
Carol returned to Milbank in 1985 and started working at Whetstone Valley Care Center. She worked between there and Park Place for 27 years, until her recent illness.

Carol liked to travel. Her favorite trip was to Germany to see her granddaughter, Jennifer. She saw many states in her travels.

Carol spent her life helping people. She enjoyed running a daycare, and took in foster children. She raised 2 of her grandchildren. She took extra special care of her residents at the nursing homes, and went out of her way to make sure they were happy during their stay. Carol volunteered at the community thrift store for several years. She enjoyed raising money every year for the Alzheimer's Memory Walk with her granddaughter, and organized many fundraisers. If at any time there was a person in need Carol would do her best to help them. When Carol was diagnosed with cancer she started the first cancer support group in the Milbank area to help people who have been diagnosed with cancer find the answers they need, and connect to support each other. This group has helped many people, and will continue helping people for many years to come. Carol brightened a lot of people's lives, and will be missed by many.

She was preceded in death by her parents, Robert and Laura McMahon; two brothers, Charles and Robert McMahon; and sister-in-law Sandy McMahon.