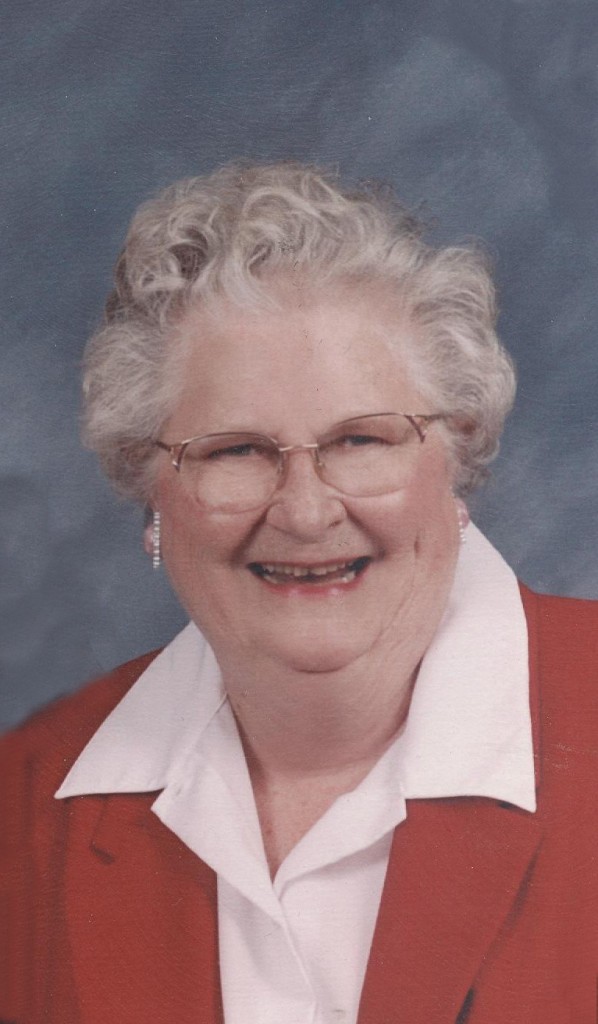 Funeral Services will be held on Wednesday, December 6, at 11:00 a.m. at First English Lutheran Church in Ortonville. Visitation will take place on Tuesday, December 5, 2017 at First English Lutheran Church from 5 - 6:30 p.m. Visitation will continue one hour prior to the service at the church on Wednesday. Buiral will take place in Mound Cemetery immediately following the service.

Bonnie Elaine Rothi, daughter of Phillip and Sigrid Nelson Bruns, was born August 4, 1925, in Ortonville and died December 2, 2017, at Fairway View Neighborhoods, also in Ortonville, MN. She was baptized and confirmed at First English Lutheran Church and remained an active member there as long as her health allowed. To ensure that each of her children knew they were special, Bonnie’s mother assigned each of her four daughters a special flower and color; the color she gave Bonnie was blue and the flower was the gladiola.

Bonnie received her entire education in the Ortonville School system, graduating with the class of 1943. During high school and following her graduation, she worked at the J. C. Penney store in Ortonville. She went on to become a service representative in the Ortonville office of Northwestern Bell Telephone Company, where she worked for 36 years.

On November 25, 1952, Bonnie and Bob Rothi were married in St. Paul, Minnesota. They lived most of their married life on their farm in rural Ortonville. In 1972 Bob and Bonnie purchased a 5th wheel camper, in which they enjoyed traveling from coast to coast and from border to border. They built their dream home on the farm in 1976. Bonnie and Bob graciously hosted many gatherings in their new log house where Bonnie used her many talents to decorate the house beautifully, especially at Christmas. One always felt welcome to pop in for an unannounced visit with Bob and Bonnie; they both enjoyed a good conversation. Bob passed away in 2012.

Bonnie was a woman who could probably be best described as “colorful.” She had a wonderful sense of humor and an infectious laugh. She was also known to be strong willed and independent, traits that stood her in good stead as she faced many trials in her later years. Bonnie was a very talented artist. She enjoyed painting, rosemaling, wood working, folk art and sewing. Bonnie had great plans to continue her sewing after she moved to town; unfortunately, her poor eyesight prevented her from fulfilling those dreams. Her basement had a wide selection of material that would rival many fabric stores. She also had her own power tools and knew how to use them. Bonnie was an excellent marksman and was known to outshoot Bob on occasion. Bonnie was a modest woman who never tried to put on any airs. She loved a good story and was always interested in hearing what was new with her friends and relatives, especially the children.

In addition to being active at First English Lutheran Church, Bonnie was a member of a homemaker’s club and the Pioneers, an organization for Bell Telephone retirees, as well as the Graceville Hunting Club.Bonnie enjoyed living in her own home until January, 2017, when ill health necessitated her moving to the nursing home in Ortonville.

She was preceded in death by her parents, her husband Bob, an infant brother, Robert Phillip Bruns, and her sister Bessie Koebernick. She is survived by her sisters Barbara Sorlien of Brooklyn Park, MN, and Berneeta Forstner of Meridian, ID, sister-in-law Nola (Fred) Lockwood and brother-in-law John (Anna) Rothi, both of Ortonville, and brother-in-law Jerry (Marie) Rothi of Canby, OR, along with the Koebernick, Forstner, Sorlien, Helgeson, Lockwood and Rothi nieces and nephews.

Bonnie was a lovely, feisty, and competent woman who lived life to the fullest on her own terms. We will miss her; but imagine her standing with a paint brush in one hand, a jigsaw in the other, while discussing politics in heaven with her eyesight, hearing and mobility completely restored!