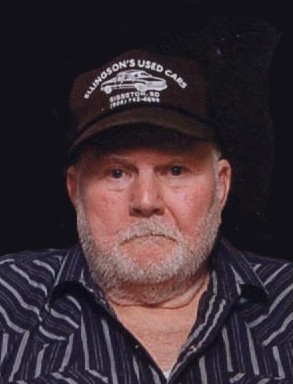 Services will be held on Saturday, August 27, at the Mundwiler and Larson Funeral Home in Browns Valley. Visitation will begin at 2:00 p.m. followed by a prayer service at 4:00 p.m. Rev. Paul Warnier will officiate.

Casket bearers will be: Butch Alvardo, Chris Patton and Mike Patton. Music will be provided by Tim Mundwiler, vocalist.

Bobby Lee Patton was born September 5, 1940, in Manassas, VA. He was the son of Robert E. Lee Patton, Sr. and Nellie (Bostic) Patton. Bobby grew up in Virginia. Following his education he worked as a truck driver. He dated Brenda C. Streightiff for 15 years before their marriage on September 5, 1989, in North Carolina.

Bobby and Brenda moved to South Dakota to be closer to Bobby's family. They moved to Browns Valley, MN and have since resided.

Bobby will be remembered for his huge personality. He had a wonderful sense of humor and was always known for his great "one liners". He enjoyed fishing and had a passion for conversion vans. His favorite food was from the south – fried corn and tomatoes.

Bobby was preceded in death by his parents; one son, Bobby Lee Patton III; one sister; and one brother-in-law.