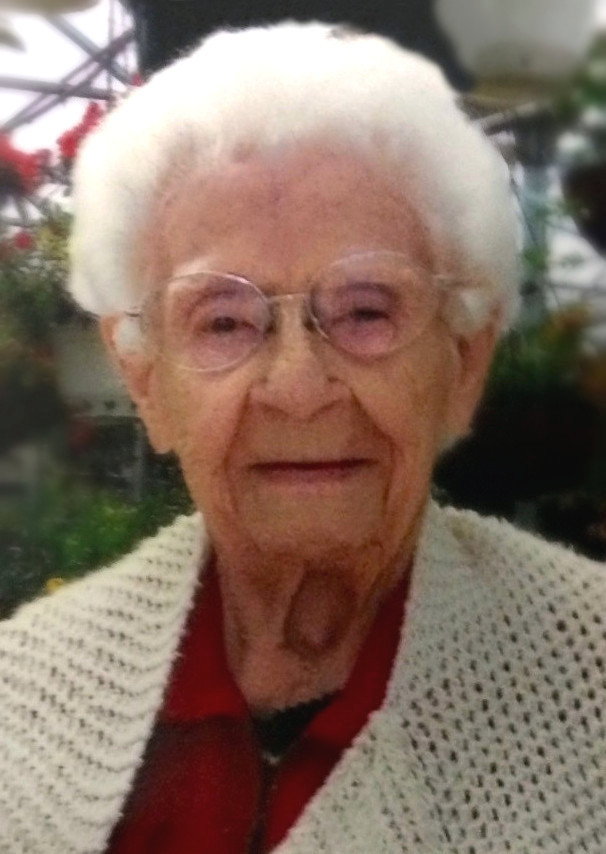 Funeral services will be held on Wednesday, October 5, 2016, at 2:00 p.m. at First United Methodist Church in Ortonville with Pastor Melanie Reiners and Rev. Keith Beachem officiating. Burial will follow in Mound Cemetery. Visitation will be from 5-7 p.m. on Tuesday, October 4, at Mundwiler and Larson Funeral Home in Ortonville. Visitation will continue on Wednesday for one hour prior to the time of service at the church.

Bliss Irene Beachem was born on August 19, 1917, in Sioux City, IA, to Charles and Geneva (Stanton Beachem). She was raised in Scotland where she attended school through the 9th grade. Bliss married Ernest Arthur Gerjets at age 18 on March 28, 1936. The families had been neighbors for three years.

The two moved to Minnesota in July of 1936 and worked for Cub Wiley until moving to Washington state in December of 1939. It was there that Ernest worked on a wheat ranch in southeastern Washington while Bliss cooked. Later they went to Bremerton where she worked in the Navy Yard's cafeteria. They returned to Minnesota in the fall of 1945 where they farmed in Big Stone County for 3 years and then went across the border to South Dakota to farm on the same land for 33 years. During these 33 years on the farm, Bliss and Ernest enjoyed their wonderful farm neighbors with whom they shared the hard work as well as harvesting equipment. In 1981, Bliss and Ernest retired and moved to Ortonville.

Bliss was well known amongst her family and friends as an excellent cook and for her love of children, always willing to help care for little ones when needed. She could also play a mean game of double solitaire and made outstandingly tasty brownies.

Bliss is preceded in death by her husband Ernest; her parents, Charles and Geneva Beachem; her sister and her husband, Helen and Ray Ludeman; her brother and his wife, Howard and Anna Beachem; two brothers, Ward and Dale Beachem and brother-in-law Royal Anderson; Ernest's two brothers and their wives, Fran and Lila Gerjets and Elmer and Delores Gerjets, his two sisters and their husbands, Henrietta and Christ Loesing and Lorene and Ruben Eilmes; and son-in-law Mel Stelling.

Memorials are preferred to the Alzheimer's Association.