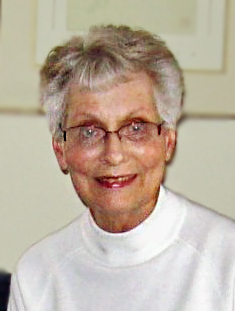 Bobbe Kositzky, age 91, of Graceville, MN, passed away on April 25, 2022, at Essentia Health - Grace Home. She had been a resident of Grace Village the past 9 years, which she enjoyed tremendously. She had a gentle soul and was a friend to all as well as being a loving mother and wife.

Memorial services will be held on June 4, 2022, at 11:00 a.m. at Mundwiler and Larson Funeral Home in Graceville. Visitation will be one hour prior to service. Inurnment of both Bobbe and Paul will be held at Graceville Consolidated Cemetery. A luncheon will follow at Graceville Community Center.

Barbara “Bobbe” Karen (Holm) Kositzky was born on December 4, 1930, in Omaha, NE, to Audrey (nee, Donahoe) and Jake Holm, who resided in Winner, SD. There, she was baptized, confirmed, and married to Paul Kositzky at Trinity Episcopal Church. A graduate of Winner high school, she attended two years of University of Nebraska where she was a member of Gamma Phi Beta Sorority. She returned to Winner to marry Paul in 1951.

In 1964, Bobbe and Paul moved their family to Graceville where she resided until her death. She was a stay-at-home mother, but was also a chef to many of Paul’s sales personnel and customers, usually for lunch. In order to obtain World Books for her family, she became a successful salesperson of the encyclopedias. While in those roles, she pursued her interests as a member of art, Bridge, and dance clubs. To say she was a seamstress was an understatement because she sewed all of her clothes and those of her daughter’s. Vogue patterns were a favorite.

Suggested memorials may be made to Grace Village or Graceville Community Library.