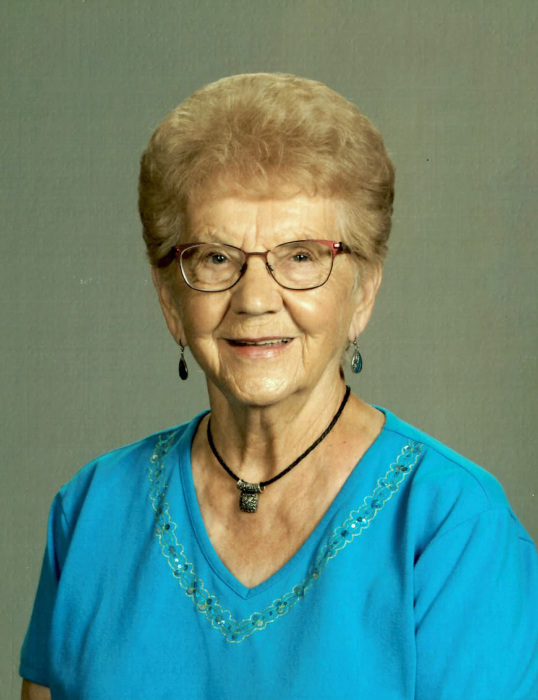 Arla Mae (Hagen) Discher was born at home on September 11, 1935, in Kindred, ND, to Norris and Karen (Lunder) Hagen. She attended a one room schoolhouse through eighth grade and graduated from Kindred High School in 1953. She attended Valley City Teacher’s College for a year before teaching at the Barrie Township School and Pleasant School in Hickson, ND. She was baptized, confirmed, and later married to DuWayne Discher from Leonard, ND, at the Kindred Lutheran Church in 1957. Mom was always proud of her North Dakota and Norwegian heritage.

Arla Mae and DuWayne made their home in Clinton, MN, for the rest of their lives. Mom was a devoted wife, mother, and volunteer in many organizations over the years. She was an active member of Trinity Lutheran Church, teaching Sunday School, singing in the choir, participating in the church circle, women’s group, and sewing and tying with the quilters. She was a Girl Scout leader, Clinton Civic Club member, volunteer for Big Stone County Red Cross, and the Almond Township Annual Fund Drive. She also delivered “Meals on Wheels” and volunteered at the food bank in Ortonville, MN, and Surprise, AZ. She helped with the Big Stone County census in 1970 and 1980. She was a proud 14+ gallon blood donor knowing how many people would benefit from each pint and afterwards could always be found working in the canteen.

Arla Mae and DuWayne wintered for several years in Surprise, AZ, where she was a member of the Sunflower Church and Bible study, and Nantucket basket making and quilting groups. She attended music events, social gatherings, and made many good friends from all over the country.

She enjoyed spending time outdoors working in her flower beds and in her garden. She was a professional when it came to rolling out and making Flötbread and Krumkake, which she shared generously. Family travels took her to Singapore, snowmobiling in Yellowstone, Glacier National Park, and Banff. Mother/daughter trips with her girls included Norway, New York City, Branson, West Coast, Hostfest, and Medora, ND, for the musical.  She especially looked forward to watching her grandchildren’s activities, puzzles, and playing board games. She was the aggravation master and usually the ruthless reigning champion by rolling one six after another.

Arla Mae was preceded in death by her husband, DuWayne in 2006; her five sisters and brothers-in-law: Myrtle and Harland Olson, Inez and Jerry White, Norma and Orville Perhus, Eileen and Gene Perhus, and Pauline and Bob Loberg; her sister-in-law and brother-in-law, Carol (Discher) and George Petrich; nephew, Steve Perhus; nieces: Kim Perhus and Sue Ann (Petrich) Luedtke; and many beloved aunts, uncles, cousins, and friends.

Mom moved to Fairway View Assisted Living in January 2022. Arla Mae’s family would like to thank the staff and Rice Hospice for their compassionate care and kindness shown to their mom and her family the short time she was there.