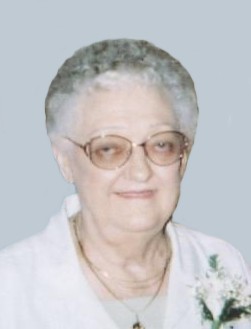 Mass of Christian Burial will be held on Thursday, August 25, 2016, at 10:30 a.m. at St. Anthony's Catholic Church in Browns Valley, MN with Father David Breu celebrating the Mass. Burial will follow in St. Anthony's Cemetery. Visitation will take place for one hour prior to the time of Mass at the church on Thursday.

Agnes Wika Hoffman was born on March 16, 1930, on a farm in Day County, SD. She was the daughter of Frank and Rose (Rumpza) Wika. Agnes attended school in Watertown, SD. Agnes was united in marriage to Edward Hoffman on June 9, 1947, in Browns Valley, MN; where they resided and raised six children. She resided in Browns Valley for 60 years.

Her time raising her children was spent sewing clothes, gardening, preserving, cooking, and working outside the home. She enjoyed oil painting, scrabble, bingo, and crossword puzzles. Over the years, Agnes enjoyed being a part of the Legion Ladies Auxiliary, Daughters of Isabella, and Christian Mothers.

Grateful for having shared her life are her children: Jim (Marcia) Hoffman of Perry, IA; Diane (Don) Heck of Belgrade, MT; Michael (Toni) Hoffman of Becker, MN; Rosemary Kaufman of Rosholt, SD; and Barbara (Ed) Hazelton of Casper, WY. She will also be missed by her eleven grandchildren, twenty-two great-grandchildren, and one great-great-grandson.

Agnes was preceded in death by her parents; husband, Edward; and daughter and son-in-law, Yvonne (Larry) Kaufman.